St Mark's started out as an iron mission-room, built in Fourth Avenue, Bush Hill Park, by the vicar of Enfield (St Andrew's) in 1885 and served by clergy from the parish church.  The permanent church of St Mark was consecrated in 1893 as a chapel of ease to St Andrew's, to serve the new suburban area which had grown up around Bush Hill Park station.  An independent parish was formed in 1903 and the vicar appointed by the Bishop of London, with whom the patronage has remained.

The church, a wide, light, aisled building with nave, chancel, and north and south chapels, was designed by JEK and JP Cutts in a plain early English style and built of red brick with stone dressings.  It was not completed until 1915; and a spire, which was planned for the north-west tower, was never built.  An diocesan architect's report on a Cutts Brothers church in another part of London described it as "architecturally uninspired; but spacious and with a certain dignity".  We are grateful for the faintest of praise; but since the outside of St Mark's does look a bit forbidding, the light and colourful interior comes as a nice surprise.  The single tolling bell, cast by the Whitechapel Bell Foundry who restored and rehung it on the western elevation in 2006, is controlled electronically.

Since 1910 the church has maintained worship in the Catholic tradition of the Church of England (see http://www.stmarksenfield.org/regularservices.htm).

This picture, which probably dates from around 1890, was taken from the railway bridge at Bush Hill Park station, and shows the still unfinished church of St Mark in the distance.

St Mark's may not be an architecturally or historically important church, but it has had at least one famous member.  The noted mystic, Dorothy Kerin, was one of only two Anglicans formally acknowledged to have received the stigmata (the marks left on Christ's body by the nails from which he was hung from the cross).  This widely-publicised event took place in 1915 in St Mark's Vicarage, where Dorothy lived until 1929, and while she was in an extended period of prayer.  Having been miraculously healed of TB in her twenties, and often suffering from other physical and mental ailments, Dorothy later founded the Burrswood healing centre in Kent.  A number of books have been written about her life and work. 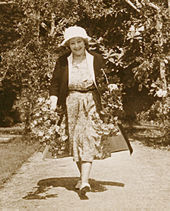 In addition to the small hall behind the church in Millais Road, the parish formerly owned St Marks Institute, built on the west side of St Marks Road midway between the railway station and the church, and completed in 1903.  The Institute, a sort of parish centre, saw a variety of uses over its life: it housed the enormous Sunday Schools that ran in the early years of the 20th century; it was commissioned for use as a sanatorium for wounded soldiers in the First World War; and was later used as a social security office. It was sold by the parish to a developer for the princely sum of £27,000 in the mid 70s, who converted it into an apartment building comprising 12 flats.  The block has since been known as , and is regularly marketed by local estate agents as a converted chapel.  This is no doubt because of its vaguely ecclesiastical style; but in fact it was never a chapel.  This error is unfortunately repeated by the local Pevsner guide.